Frenulectomy at Our Edmonton Alberta Clinic 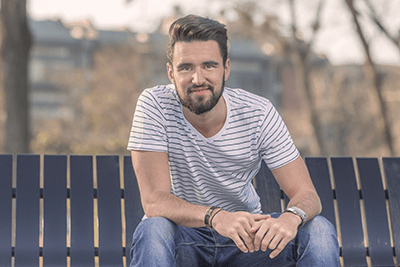 Some men experience pain due to a tight band of tissue connecting the glans to the shaft of the penis on its underside.

When the frenulum is tight or short, this is called frenulum breve. It can occur in both circumcised and uncircumcised men. It can cause pain with erections or bleeding during sex due to micro-trauma.

A frenulectomy is a specialized technique that treats this condition by removing the tight restriction, allowing increased penile skin range of motion and sexual enjoyment.

Our Edmonton clinic serves men from all over Alberta, and beyond. 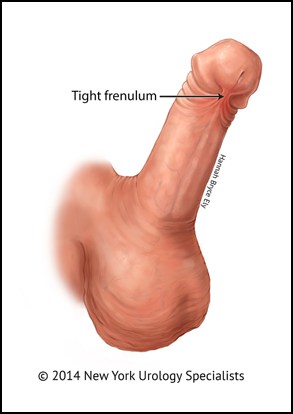 A frenulectomy procedure can alleviate the pain often associated with a tight band of tissue between a penis’ shaft and the glans.

A tight frenulum can exist independent of whether a man has been circumcised, and it can create a tight and curved section of the penis that is susceptible to micro-trauma, causing bleeding and painful erections.

The frenulectomy procedure involves the removal of the restricting tissue for increased range of motion in the penis and enhanced sexual pleasure due to the end of pain with erection.

The procedure (done in under 20 minutes) is performed using a long-acting local anaesthetic and generally results in instant relief after a brief recovery period.

Frenuloplasty of the Penis

A frenuloplasty procedure can lengthen the frenulum and thereby relieve the discomfort caused by a short frenulum.

Our doctor will consult with you on the recommended procedure for your penis, and expected outcomes. 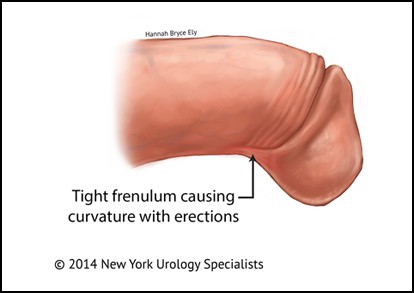 The frenulum of the penis is a band of tissue located underneath the penis.

When the frenulum is tight or short, this is called a frenulum breve. This can result in tension on the frenulum during erections, which can rip and tear during vigorous activities such as sex, causing pain and bleeding, which in turn can cause men to lose their erections.

Some men go through their entire lives suffering from pain and bleeding unaware that there is a cure.

The degree of tightness and thickness of the frenulum varies from man to man, but any man affected by an overly short frenular band should seek a consultation for a possible procedure to end uncomfortable tightness with erection.

The issue can be addressed by removing or lengthening the penile frenulum.

A Tight Frenulum May Cause Premature Ejaculation

Premature ejaculation is uncontrolled ejaculation either before or shortly after sexual penetration. It happens with minimal sexual stimulation and before the person wishes.

It may result in unsatisfactory sex for both partners. This can increase the anxiety that may add to the problem. It is one of the most common forms of male sexual dysfunction. Between 30% and 70% of men have PE. While it is more common in younger men, it can happen at any age.

Having an orgasm too soon is not always cause for concern. However, clinical diagnosis is made when a man exhibits the following symptoms:

Premature ejaculation can be classified as:

Lifelong (primary). Lifelong premature ejaculation occurs all or nearly all of the time beginning with your first sexual encounters.

Some studies report that a short frenulum is found in up to 43% of individuals affected by premature ejaculation. It is thought that the frenulum plays an important role in penile erection and when frenulum tension exceeds a certain limit, orgasm and ejaculation may be accelerated. When the frenulum is lengthened, penile tension and sensitivity may be decreased.

Penile frenulectomy has been shown to be effective in some but not in all cases of premature ejaculation (see source study).

Can the problems associated with short frenulum get better on their own?

No, unfortunately a short frenulum generally does not get better on its own. Some physicians suggest stretching exercises but the frenulum is a rather tough tissue that is not easily stretched. A frenulectomy is usually necessary to release the tight band of tissue that is creating painful downward traction on the glans.

What is the treatment for a short frenulum?

A frenulectomy is a specialized technique that treats this condition by removing the tight restriction, allowing increased penile skin range of motion. It is done under local anaesthesia in our Edmonton clinic and takes only about 20 minutes to perform. The goal of the procedure is functional, so that the tight frenulum is released, allowing improved sexual pleasure without fear of pain or bleeding.

How do I book an appointment?

Please contact us for a consultation with Dr Lohlun.

Is a penile frenulectomy or frenuloplasty painful?

What are the risks of the frenectomy procedure?

How long does it take to recover?

Recovery from penile frenulectomy is fairly fast and painless. Most men do not require additional pain medications after the procedure and are able to return to office work in the next days.

If your work requires heavy or physical activity, you will need a few more days off.

After frenulectomy, when can I have sex again?

We generally recommend no sex for at least 5-6 weeks to allow the surgical site to heal optimally and sutures, if required at the time of the procedure, to dissolve.

How will this affect my sex life?

After a frenulectomy, because the tight band is released, sex becomes more pleasurable due to less pain and worry from tearing and bleeding.

If I am uncircumcised, how will frenulectomy affect my foreskin?

Our Frenulectomy Method in Edmonton

Our Edmonton frenulectomy and frenuloplasty doctor, is familiar with several different techniques being used around the world so that we can provide optimal results for patients.

Depending on the size and shape of your frenulum, we may employ a scalpel or bipolar diathermy to release it.

Once the frenulum is released, we will then assess whether dissolvable stitches will be necessary to approximate the incision.

Regardless of your anatomy, our goal is to provide the optimal aesthetic and functional result.

Recovery using our technique takes only a few weeks.

Before and After Frenulectomy

Please research frenulectomy and consult with our doctor, and your own, so you are confident and informed about your decision.

For one week prior to your procedure, do not take any Aspirin or Non-Steroidal Anti-Inflammatory Drugs such as ibuprofen, Motrin, Aleve, Advil, Naproxen, or Diclofenac.

Please avoid any alcohol the day before the procedure.

On the day of your surgery, eat before your procedure, a normal breakfast or lunch to avoid becoming lightheaded. Take 2 tablets of extra-strength acetaminophen just before leaving your home.

You are asked to come at least 15 minutes prior to your appointment. You are welcome to drive yourself to the office and back home unless you have a history of easy fainting.

Our staff will usher you into one of our surgical rooms and then our doctor will administer the local anaesthetic. It is then time for your procedure.

Patient Instructions After Frenulectomy or Frenuloplasty

There may be a small amount of bleeding at the surgical site. This is normal and will stop in a few days. If it does not call our office or emergency number.

Continue applying antibiotic ointment at the site for 1 week.

You may return to office work in the next days but if your work requires a lot of activity you should take at least 2-3 days off.

We recommend no sexual activity for about 5-6 weeks or until the sutures come out completely.

Patients who are traveling more than 3-4 hours away may want to stay at a local hotel overnight.